We’re stoked to have ARIA-nominated musician Mo’Ju joining us this Friday on The Music Weekly in light of their set at Meadow Music Festival!

Initially rocketing into the stratosphere in 2018 thanks to the swaggering arrival of break-through single Native Tongue, the newer Mo’Ju sound doubles down on lush electronic elements and soft textures. A warm bed of sound allows piercing and honest lyricism to come to the fore. There’s a spacey therapeutic feeling emerging as Mo’Ju slides deeper into a future-soul sound.

An introspective journey awaits those lucky enough to be sitting on a Bambra hillside when Mo’Ju arrives.

Last November, Otways music festival Meadow announced its 2022 return to the bush with a delectable homegrown lineup spearheaded by Hiatus Kaiyote, Methyl Ethel and Tropical Fuck Storm. With a third Grammy nomination up for grabs this year, unfortunately Hiatus Kaiyote will no longer be performing at Meadow and will instead be making their way to the US to attend the coveted awards ceremony in 2022.

In brighter news, the festival will be welcoming a slew of new acts to its already overflowing bill of local excellence at their home among the gumtrees in March. 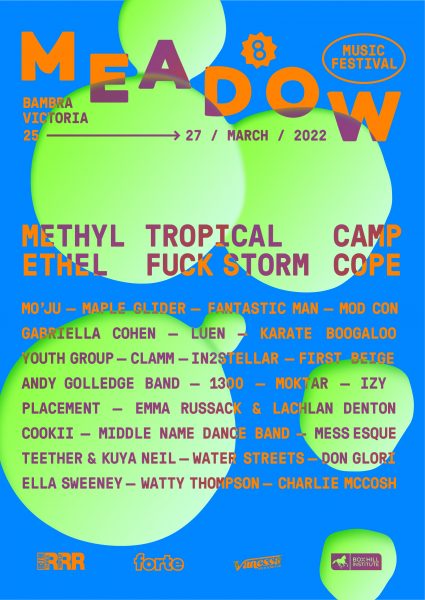 Final Release tickets on sale $265 + booking fee. Teenagers accompanied by adults can join the festivities but require a full ticket. Children under 12 enter for free. For tickets, information, and artist profiles go to www.meadowmf.com

Hear Mo’Ju speak with us about their latest EP and upcoming performance at Meadow Music Festival on The Music Weekly: