THIS ARTICLE ORIGINALLY APPEARED IN FILMINK 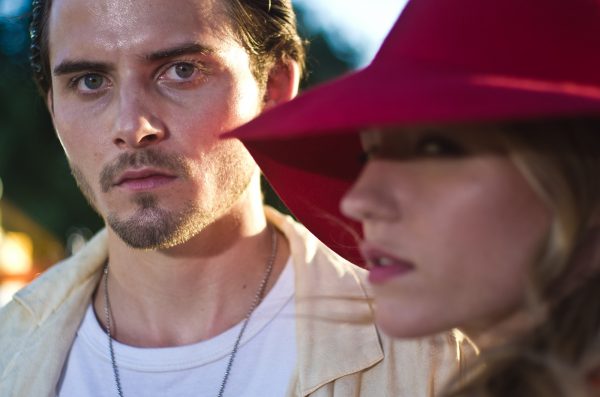 A candy-tinged, sun-drenched pop art Aussie thriller that most definitely does not fit into a line-up with the likes of Chopper, The Hard Word and Animal Kingdom, Burning Kiss is a canny mix of style and substance. Assured and original, the film marks the debut of young writer/director, Robbie Studsor, who makes the jump to features after helming the short Trinkets, and working on the scripts for several shorts and one feature (2010’s noir Esoterica) for regular collaborator Sam Barrett.

Burning Kiss begins six years after one-time police detective Edmond Bloom (Richard Mellick) was left crippled by the car crash that killed his wife Juliette. With the killer never caught, Edmond has fought to solve the mystery, all under the watchful eye of his damaged 20-year-old daughter, Charlotte (Alyson Walker) whom he indirectly blames for the tragedy.

But when mysterious drifter Max Woods (Liam Graham) lands on his doorstep, Edmond is thrown into an even murkier moral morass. Max claims to be the driver of the car that put Edmond in a wheelchair and ended his wife’s life, and he’s begging for either forgiveness or punishment. But that isn’t the way that the controlling and arrogant Edmond planned it. He has other ideas when it comes to his end-game with Max, and Charlotte will quickly find herself wedged somewhere in the middle.

Writer/Director of Burning Kiss, Robbie Studsor, joined Brad on Arvos to talk about the making of the film: