With big energy, tasteful savagery and uncompromising creative vision, Shanae, the Australian-born South African is fearless in her pursuit to be loud and unapologetic about one’s truth.

Born in Sydney, Shanae grew up living between Australia and her parent’s home country of South Africa. Music became her cultural anchor between the country she was born in, and the South African blood running through her veins.

Her deep roots in Gospel music and Cape-Townian Jazz, mixed with her love for Neo-Soul, RnB and Hip-Hop has allowed her to create art without boundaries, enabling her to write and perform from a place of true freedom and absolute certainty.

This freedom means she can create music that crosses genres and is impossible to box in, with her strong, confident vocal delivery and razor-sharp lyrics acting as the anchors to keep her art consistent. 2021 saw Shanae release debut single ‘Come On Over‘, followed by ‘Locking Eyes‘ and ‘Some Type Of Way‘, racking up over a million streams.

2022 has seen Shanae place Top 10 in the publicly voted for “Acclaim Allstars Class of 2022”, plus has seen her tour consistently throughout the year, recently supporting PJ Morton across his sold-out Sydney and Melbourne shows. August 2022 will see the highly anticipated release of her single Illusions, plus the release of her debut mixtape.

You can catch Shanae performing at Live Nation’s ONES TO WATCH showcase as part of Sound West, Thursday 25th August at The Albion Hotel in Parramatta. 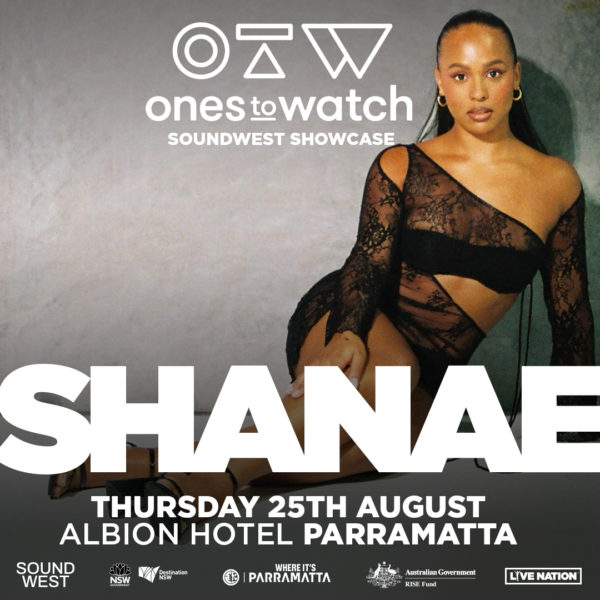 Hear Shanae join us on The Music Weekly ahead of her appearance at Sound West: