Iconic Aussie band Spiderbait have announced their national Tour In The Key of J – a run of unique and special shows dedicated entirely to celebrating the legacy of their revolutionary bass player Janet English. In support of their new album, Sounds in The Key of J (out now), they have also released the official video for their first new single in nine years, My Car’s A UFO.

Their first headline tour since their sellout Ivy & The Big Apples tour in 2017, this distinctive set of shows will kick off in Tasmania at Albert Hall (Launceston) on June 3, before moving through Hobart, Sydney, Melbourne, Brisbane, Fremantle and finishing up in Adelaide at Hindley St Music Hall on August 20.

The band will also be appearing at Groovin The Moo Maitland, Canberra and Bendigo in April, and Valleyways Festival in Camden NSW in September. 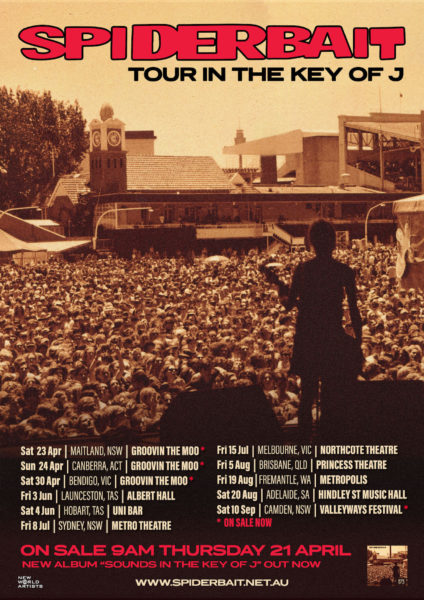 The story of Spiderbait is an unlikely but heartwarming one – three friends from a small Australian country town taking on the music scene, and emerging triumphantly 30 years later, friendship intact, and now one of the biggest and best rock bands on the national landscape.

Taking inspiration from far-reaching influences from all sides of the musical spectrum (everything from Slayer to The Bangles), Spiderbait took their fervent thrash-pop from their tiny hometown of Finley in NSW down to Melbourne and immersed themselves in the rich, fertile creative scene.

From there they quickly consolidated their status as national treasures, with their popularity spanning three decades with no signs of abating.

Spiderbait have released seven acclaimed albums, which have all racked up gold, platinum or double platinum status and have combined Australian sales of over one million units and over 500 million global streams.

They have also secured pretty much every accolade there is to achieve on the Australian scene, having taken home numerous ARIA Awards, chalked up a number one single with their cover of Leadbelly’s Black Betty in 2004, and were the first Australian act to top the prestigious triple j Hottest 100 with Buy Me A Pony in 1996.

Hear Kram from SPIDERBAIT join us on THE MUSIC WEEKLY to unpack the new album and their upcoming tour: